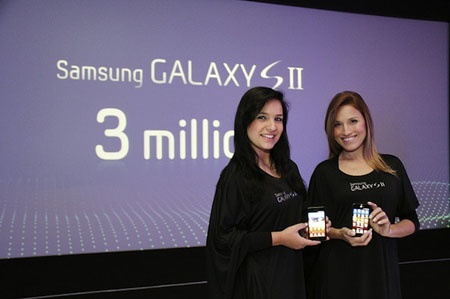 Whatever happened to the American dream, in the world of smartphones? Well, no one would know who really had the right to dream that dream in the first place. So, we had this whole wave of a manufacturer that made fine, white, ergonomic, ‘best-in-class’ devices and then we had the competition from the far east taking it a notch lower to facilitate the common man. A notch that pretty much fitted the bill for the best mobile platform until now. They tied up and voila, we have the Samsung Galaxy S II as the next best thing to happen after its predecessor. The phone’s been such a huge hit with the promise of a 4.27-inch Super AMOLED display, a dual-core CPU, an 8-megapixel rear-facing camera with 1080p video recording and a 2-megapixel front-facing camera, running Android 2.3 Gingerbread, Bluetooth 3.0+HS, and HSPA and a world of exciting specifications.

It seems that the Samsung Galaxy S II is such a huge hit that the company posted on their Flickr account, the following: “Within the period, a unit of Galaxy S II was sold in every 1.5 seconds. This record shortens the record of 85 days of its predecessor Galaxy S, a ten-million global seller, by 30 days”.
BetaNews