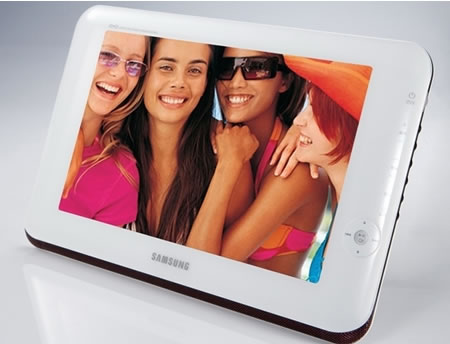 Samsung Korea has announced the largest Mobile TV with a terresterial DMB tuner, with a large screen of 10 inches. Those of you not aware of T-DMB it is a digital radio transmission system for sending multimedia (radio, TV, and datacasting) to mobile devices. It is currently available in South Korea only where you get 7 TV channels, 13 radio channels, and 8 data channels. Coming back to the R7 it’s 10 inch screen has a 16:9 image ratio optimized for showing digital broadcasting. In addition to this it also functions as a music player and image viewer. The main objective of Samsung is to shift concept of TV from a fixed, family-oriented device to a more mobile, personal gadget. Samsung hopes that the R7 will bring a revolution similar to the one bought by Walkman in the early 80’s.

Samsung plans to promote the Mobile TV as a versatile home multimedia device.