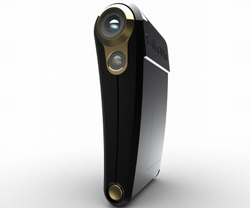 Samsung Pixel phone recording concept is a wearable one

The Samsung Pixel phone may be one of the smarter concept innovations that we have seen come to cameras. Designed by one Ryan Held, the camera phone has more camera than phone. That’s quite what some people keep complaining about in their ‘so-called-12-megapixel-underperforming-shooters’. The Pixel has an OLED film used in the phone and the vertical design enhances vertical gripping with a tube-like structure that allows video photography conveniently.

There’s no descriptor that justifies the wearable tag as of now. We’ll provide updates as soon as we sniff any dope in this space.
DesignBuzz