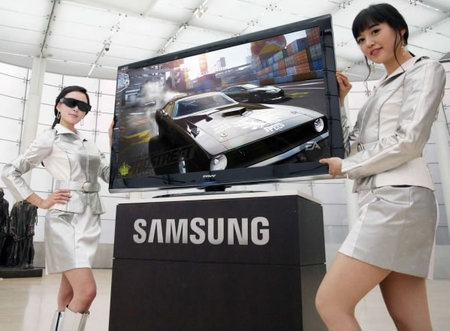 Samsung has announced their 3D Ready PDP TV ‘PAVV Cannes 450’ for the Korean market. The TV features 1,000,000:1 contrast ratio and 3D content support. Such a high contrast ratio is achieved thanks to Cell Light Control and is equipped with 2008 Ultra Daylight technology and DNIe+ (Digital Natural Image engine+) chipset. You can catch your fav 3D games and movies with the Cannes 450 when you hook the TV to high performance PC supporting 3D software and then wear your 3D glasses. Electronic Arts is coming out with content for TV, they will be dishing out a variety of 3D content for 3D Ready PDP TV. The PAVV Cannes 450 also features enhanced low-sound performance and has adopted a slimline design with an upgraded black panel. It has incorporated three entertainment modes; sports, movie and game.