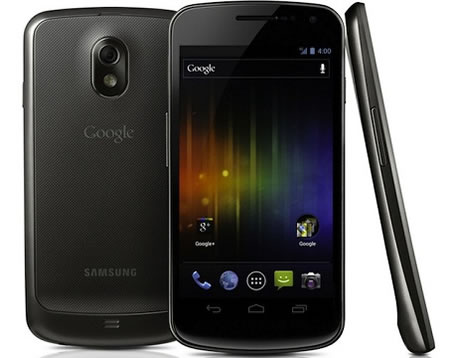 The iPhone 4S release might have stirred up some trouble in our Android land earlier, but it seems to have got back with an arsenal here. Google’s much awaited Ice Cream Sandwich 4.0 OS is here and is first pumping life in the new Samsung Galaxy Nexus. Before you even begin to savor the elements of the OS here, the sofa-king screen will quickly grab your attention. The 4.65-inch screen is from the category of Super AMOLED Plus and boasts of a magnificent 1280×720 resolution here.

It seems to have borrowed the concept of no front physical buttons from the WP7 Mango handsets thus giving you more of screen area without making it too cumbersome for your hands. With respect to the external form factor, Samsung seems to have toed pretty close to their Nexus S partly line. The rounded edges will look familiar with the dark color and the slightly curved face that is intended to cuddle up to rest comfortably with your cheek when you hold it to your ear.
The new lock screen also makes use of facial recognition technology to unlock phones, something which also led to a bit of a comical situation when the phone refused to identify Matias Duarte (Director of Android operating system) at the Samsung event. They say his makeup and the lighting seem to have conspired against him. Then there is the NFC goodness which seems to be the most logical thing post the launch of Google Wallet service. Siri could be making waves at the moment, but this baby too has its power of speech. You can speak into the phone and it will type your emails, SMS messages and more with your voice with the text immediately appearing on the screen without any lag. It will be driven by 1.2GHz dual-core processor from Texas instruments and will support both HSPA + and LTE network depending on your region. Other specs include a 5MP camera on the back (that’s a bummer owing to the Galaxy lineup singing to the tunes of 8MP resolution), 1.3MP front facing cam, 1GB ram with 16/32GB storage and 1750mah standard battery
Ice Cream Sandwich seems to be something born out of the marriage between Gingerbread and Honeycomb with some extra additions. The biggest of all is the ability to switch between running apps and to actually kill them quickly. Then there is also the segregated widgets and apps menu which makes managing things on the home screen a bit easier. For now we know it is going to be available in November whereas for pricing rumor mills have predicted this one to go on sale from Verizon first for $299.
[Gizmodo]