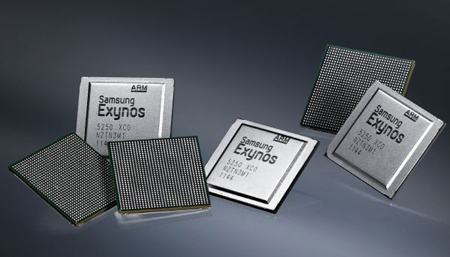 The Samsung army is pretty much hogging up a major share of sensible phones and portables. Here’s the part that reminds you about t he Samsung Exynos 5250 is one of the latest contenders announced. It’s said that this system on a chip (SoC) will run with dual processors based on the ARM A15 design. This processor will work twice as fast as the Cortex A9 design with an operational frequency of 2GHz. The processor can execute two functions simultaneously like the pompous Intel processors from yesteryear. There’s also some word about the increased graphics. It seems that the device can do a hefty 2506×1600 pixels, effortlessly. There’s some dope on the chip being able to handle 1080p videos at 60fps.

Other features in the Samsung Exynos 5250 that can make headlines include 3D stereo, an HDMI 1.4 port, USB 3.0, SATA, and adherence to several other standards. The second half of 2012 will see the samples of the chip roll in. The actual products may land by the last quarter of 2012.
Anandtech