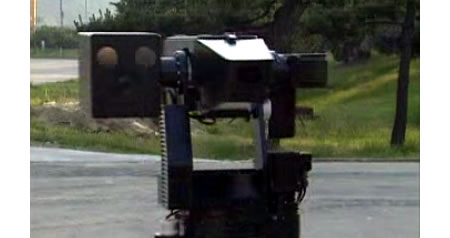 Samsung has partnered with Korea university and developed the machine-gun equipped robotic sentry. It is equipped with two cameras with zooming capabilities one for day time and one for infrared night vision. It has a sophisticated pattern recognition which can detect the difference between humans and trees, and a 5.5mm machine-gun. The robot also has a speaker to warn the intruder to surrender or get a perfect headshot. The robots will go on sale by 2007 for $ 200,000 and will be deployed on the border between North and South Korea.
(Video after the jump)