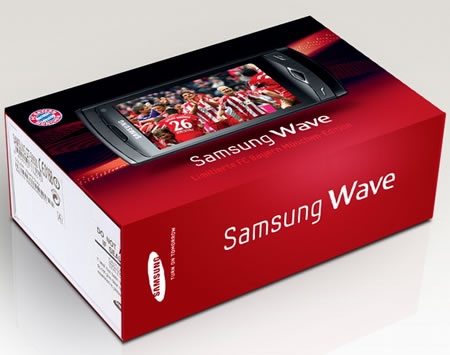 From the house of Samsung together with FC Bayern Munchen, comes another one-of-its-kind limited edition, the Bada-based smartphone, the Wave S8500. Called Samsung Wave Bayern Munchen Edition, the handset comes with a pre-installed Bayern Munich app, and free access to T-Mobile’s “LIGA total!” mobile TV service for three months. FC Bayern Munchen fans can cheer with this new limited edition version of the Wave, which will be available across Germany starting this month for €429 ($565). You also get a €65 ($86) voucher that can be used for buying gifts from the Official FC Bayern Munchen Online Shop.

This is not the first time when Samsung launches a football-themed edition of a phone – previous ones including the Galaxy S and Galaxy Tab Luxury Edition or the Player S556 Anelka Edition.
[Samsung Germany via Unwiredview]