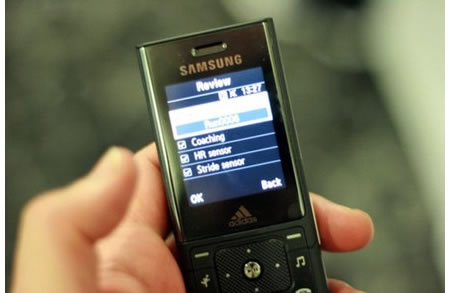 Going the sporty way, Samsung and Adidas have announced (rather confirmed the rumors) the SGH-F110 fitness phone. The phone will be launched in UK next month and will be a direct hit to the Nike+ training system. Of course the usual suspects make to the list, heartbeat monitor, step counter, built-in MP3 player / FM tuner, two-inch LCD, 1GB of internal memory and a two-megapixel camera are all in there. Apparently the phone chimes every time you slow down. Pricing hasn’t been disclosed as yet.
Source