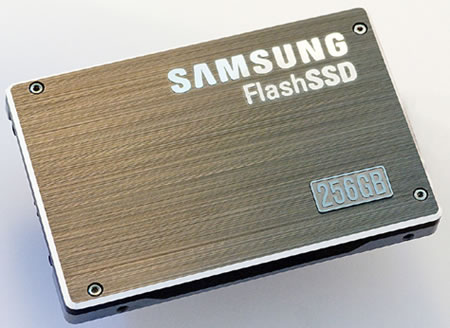 Touting it as the World’s Fastest and Largest Capacity 2.5-inch, MLC-based (256GB) SSD with SATA II Interface, Samsung has a pretty neat solid-state drive in its hands. With sequential read speed of 200 megabytes per second (MB/s) and sequential write speed of 160MB/s, the SSD is about 2.4 times faster than a typical HDD. The drive samples will be available by this September but actual consumers will be able to pick it up by the year end (that’s when it goes to mass production); a 1.8-inch version will also be out by then.

Samsung Develops Taipei, Taiwan, May 26, 2008 – Samsung Electronics, the world leader in advanced memory technology, announced today that it has developed the world’s fastest, 2.5-inch, 256 Gigabyte (GB) multi-level cell (MLC) based solid state drive (SSD) using a SATA II interface, at the fifth annual Samsung Mobile Solution Forum held here today. Samsung’s new 256GB SSD is also the thinnest drive with the largest capacity to be offered with a SATA II interface.
With a sequential read speed of 200 megabytes per second (MB/s) and sequential write speed of 160MB/s, Samsung’s MLC-based 2.5-inch 256GB SSD is about 2.4 times faster than a typical HDD. Furthermore, the new 256GB SSD is only 9.5millimeters (mm) thick, and measures 100.3×69.85 mm.
Once introduced, the Samsung’s 256GB SSD will mark the largest capacity SSD from the global market leader in SSD sales, effectively eliminating density as a barrier to SSD adoption in the consumer space.
“With development of the 256GB SSD, the notebook PC is on the brink of a second stage of evolution. This change is comparable to the evolution from the Sony Walkman to NAND memory-based MP3 players, representing an initial step in the shift to thinner, smaller SSD-based notebooks with significantly improved performance and more than ample storage,” said Jim Elliott, vice president, memory marketing, Samsung Semiconductor, Inc.
Through major advancements in proprietary controller technology, Samsung’s new MLC 256GB SSD, besides being comparable in speed to an SLC-based SSD, also boasts reliability equal to that of SLC SSDs, with a mean time between failures (MTBF) of one million hours, while costing considerably less. Power consumption is also exceptionally low at 0.9 watts in active mode.
In addition, the drive offers a sophisticated data encryption process that prevents data stored on the SSD from being accessed in an unauthorized manner, even after the SSD is removed from the PC.
Overall, the number of computing units in which SSDs are being offered is expected to increase dramatically once Samsung’s previously announced 128GB SSD and the new 256GB SSD are launched. At present, Samsung is actively involved in high-capacity SSD design-in activities for all of the top PC and server manufacturers from the U.S., Asia, and Europe.
Samsung is expected to begin mass producing the 2.5-inch, 256GB SSD by year end, with customer samples available in September. A 1.8-inch version of the 256GB SSD is expected to be available in the fourth quarter of 2008.
According to a Q1 2008 report by the semiconductor market research firm iSuppli, the SSD market will grow at an annualized average of 124 percent during the four-year period from 2008 until 2012. iSuppli now projects SSD sales to increase by an additional 35 percent in 2009 over what it projected last year, 51 percent more in 2010, and 89 percent more in 2011, and continue to show dramatic increases in subsequent years 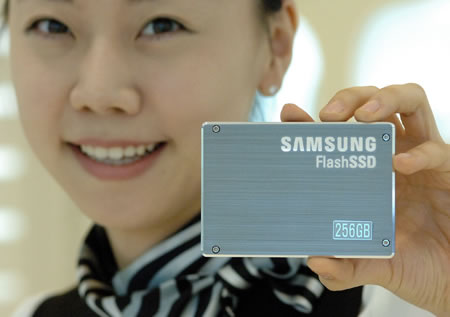