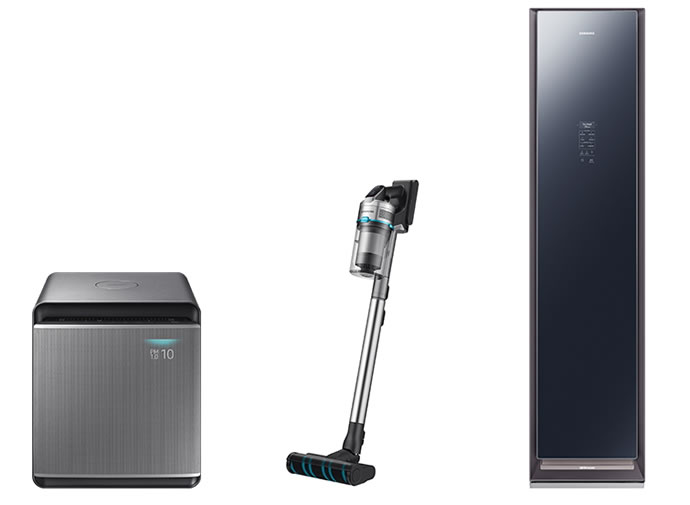 Samsung will unveil three new advanced home appliance in Europes— the POWERstick Jet vacuum cleaner, AirDresser, and the Cube air purifier. These three home appliances are being introduced at IFA 2019 ahead of launches elsewhere. The POWERstick Jet targets consumer demand for suction power from their cordless vacuum cleaners to match that of corded units. POWERstick Jet delivers, using Samsung’s Digital Inverter Motor and Jet Cyclone System to generate up to 200W1 of industry-leading suction power. This results in stronger cleaning and offers consumers maximized convenience.Samsung developed the best-in-class 5-layer HEPA filtration system for the POWERstick Jet. The impressive filter captures 99.999%2 of dust particles and allergens. POWERstick Jet comes with a removable high-capacity battery, meaning you can replace it with a spare4 to clean for twice as longer.

AirDresser freshens clothes with its Jet Air system and Air Hangers, using powerful jets of air to loosen and remove engrained dust, even from deep within the fabric. The Jet Steam feature sanitizes garments gently to get rid of bacteria while Heatpump Drying also provides delicate care for clothes by drying them at a low temperature to reduce shrinkage and heat damage. AirDresser features a Deodorizing Filter to capture and remove odors while preventing them from building up inside the unit. It even has a Dust Filter that keeps the inside of the compartment clean by capturing the dust left floating in the air.

Samsung Cube AX9500 is Samsung’s first air purifier model to launch in the European market, and features the world’s first Wind-Free air purification system. Unlike other air purifiers, the Samsung Cube AX9500 does not have an air draft or makes loud noises. Also, powerful air purification is provided with a 3-layered purification system that purifies and deodorizes air. First, the Washable Pre Filter extracts larger dust particles, such as pollen and pet dander. Then, an Activated Carbon Deodorization Filter reduces the presence of various potentially dangerous gases, such as formaldehyde, toluene, ethylbenzene and styrene. Finally, an ultra-fine dust filter captures up to 99.97% of 0.3µm sized dust particles. Because they are modular, two Cubes can be easily stacked — each comes with its own docking component — so that each unit can release air in different directions depending on how they are set up. All three products can be experienced at the Berlin City Cube at IFA between September 6 and September 11.