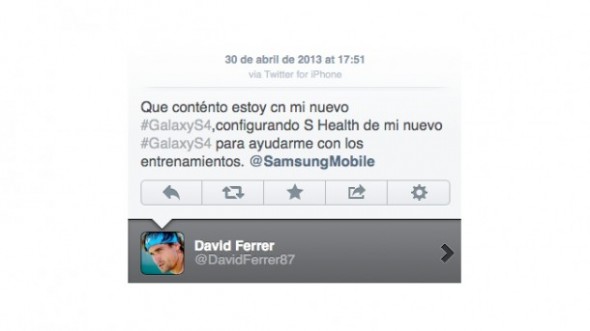 Samsung-sponsored tennis-star goofs up; tweets about the Galaxy S 4 from his iPhone!

Spanish tennis player, David Ferrer, seems to have had an embarrassing moment lately, leaving one of the world’s biggest smartphone manufacturers, Samsung, red-faced! David was, obviously, paid by Samsung to tweet about his swanky new Galaxy 4 smartphone. Well, he did do it, only from his Apple iPhone however! What makes this incident hilarious is the fact that the two phones are rivals and the two manufacturers have had several arm-wrestling matches and have also spent considerable amounts of time at court, pointing fingers at each other.


But then again, David could indeed just be gadget aficionado like us who simply can’t settle on a single piece of technology. The tennis star might have very well picked up both the phones and could be using each of these from time to time. That apart, our conscious minds tell us that David could probably be tweeting about his new phone from his soon-to-be-disposed iPhone! And if all of that is untrue and the rumors we here are indeed true, we think technology giants should first screen their celebrities before unleashing them on social media platforms!