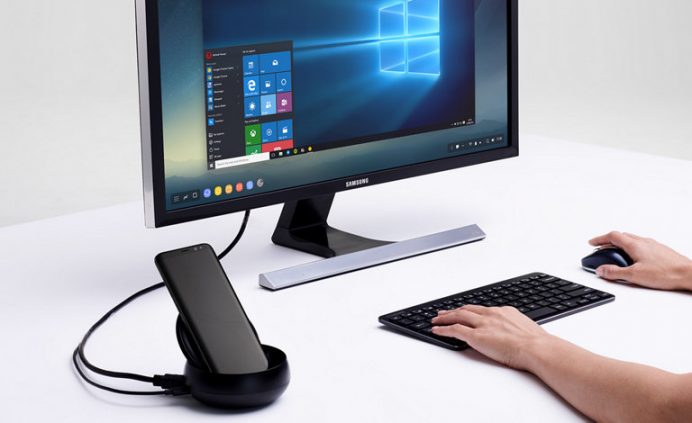 Microsoft was very ambitious about its Windows 10 Mobile. The Redmond Giant wanted to create smartphones that can function both as a phone and as a computer. They named this project Continuum, and it was something that kept the world excited for a while in 2015. The idea was great in itself but was not enough to give Windows 10 Mobile the momentum it needed to stand a chance against its competitors. There are a handful of devices available that support the technology but not enough for them to matter.


Samsung dusted the concept and gave it new life this year, with the release of the Galaxy S8 line. The Samsung DeX (Desktop eXperience) concept is similar to Microsoft’s Continuum but a bit more polished – and it has one of the biggest (and certainly one of the most talked about) smartphone manufacturers of the world behind it, one that sets the trends in the mobile world. Basically, DeX is a dock that allows Galaxy S8/S8+ and Note8 users to connect their smartphones to a large screen, a keyboard, and a mouse, and use it as a desktop PC, a media player or – why not – a gaming device. Sure, the technology is still immature and will need a lot of polishing by the edges, but it already shows promise – one day, we might need nothing but our smartphones to work, play, and have fun.

Will it go mainstream?
It might, especially if Apple sees any promise in the technology. There are so many exciting free online games that you can play on your Apple mobile phone today that is unavailable to desktop users. Even if Apple has its own line of desktop and portable computers, along with a complete office infrastructure, the idea of centralizing all Apple products inside a pocket-sized machine might seem attractive for the Cupertino giant.

How much does it cost?
The cheapest Samsung Galaxy S8 model sells for around $600 and $650. Add the cost of a DeX dock – it is said to cost around $160 – and you have a more than decent office-type PC and an excellent Samsung smartphone for a price of, say, $800. If you add the price of a foldable keyboard ($99.95 at Microsoft) and a Bluetooth mouse ($29.95), you’re still under $1,000. And such a mobile office can prove very valuable when you need to work in a hotel room, for example, where the only things you have at hand are a TV and WiFi.

While the range of apps that work with DeX is very limited at this time, as the technology spreads, the list is likely to grow – after all, we’re talking about a Samsung-backed technology. It seems we might just be witnessing a new evolutionary step in personal computing.