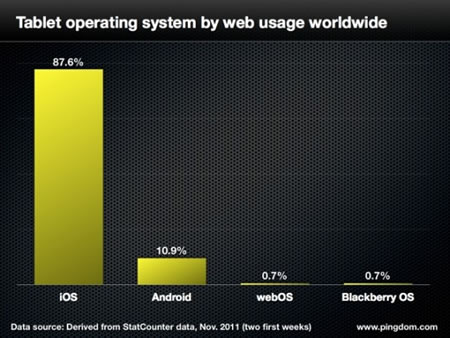 We’ve seen the rise and surge of tablets in the markets today with just about every firm developing its own. A recent report from the Royal Pingdom now made us believe that Apple still rules the tablet market today with the iPad and the iPad 2. The report claims that 87.6% of global web traffic for tablets is made up of iPad users alone! And that’s a pretty astounding figure, given that companies like Samsung, HTC, Motorola and the likes have been hell-bent on developing state of the art Android tablets lately. Android users however make up a measly 10.9% of the global tablet web traffic, followed by webOS and Blackberry OS users, each at 0.7%. Today, Apple has sold a reported 40 million iPad units and these figures pretty much show who’s boss of the tablet trade.