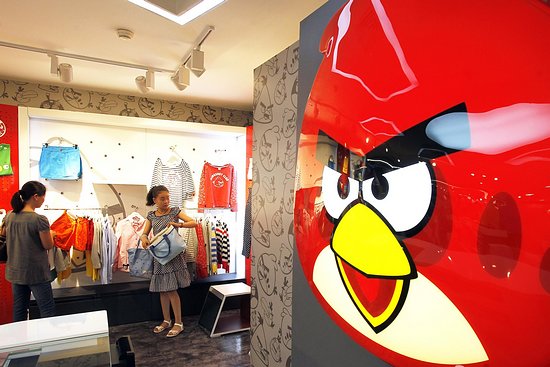 Angry Birds has been the number one downloaded game across all mobile platforms for a while now and catching on the success is Angry Bird merchandize that is making great sales too. Everything from Angry Bird themed T-shirts, toys and amusement parks are making a rage and now for the first time outside of its home base in Finland, Rovio Entertainment has opened an Angry Birds theme brand store in Shanghai. The store that’ll sell licensed Angry Birds apparels, iPhone/iPad cases and toys specially designed for Chinese customers is located in Xujiahui area Shanghai, China.


The theme store in Xujiahui is the first of 25 such brand stores scheduled to be opened across China by the end of this year. The store is selling iPhone case at 138 yuan ($21) and a T-shirt at about 299 yuan ($50), which by no standards is being considered cheap in China, yet Rovio expects to triple is revenue in China by the end of 2012. Besides the official merchandize stores, Rovio also plans to launch 10 to 20 Angry Birds theme parks in China, with the first one expected to open in October this year.