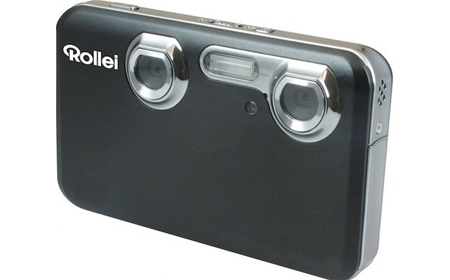 With the end of a very 3D-laden 2010, we bring up the rear in style. Introducing, no, not a 3D LED TV or fancy projector, but, instead, a 3D digital camera. The Rollei Power Flex 3D digital camera captures videos up to resolutions of 720p and still images at a fair-enough 5-megapixel resolution. The 2.8-inch LCD screen on the camera displays pseudo-3D, captured images without the need for glasses. It looks quite plain but when you look at the way the features are treated, you may well have a different opinion. I wonder how adventurous people are with their camera buys. Two lenses look a lot stranger than one.

There’s no word of a US release but it will be made available in Europe for €300. That’s around $393. Not too much.
UberGizmo