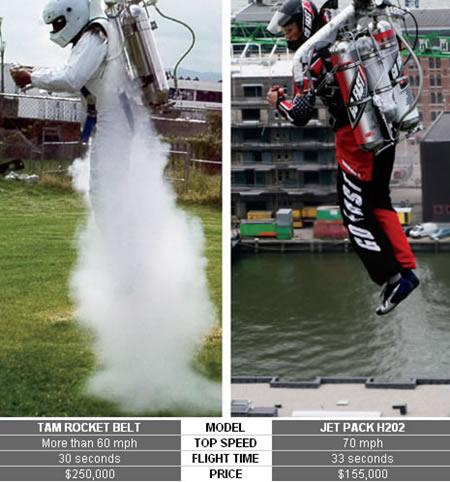 Those firm devotees of Jetsons are in for a big surprise. Rocket Belts from two companies will soon be available in the commercial market. Tecnologia Aeroespacial Mexicana (TAM) from Mexico has developed the custom-built TAM Rocket Belt. On purchasing one, the user will receive flight and maintenance training. The belt works with hydrogen peroxide and on a full tank it can weigh between 124 to 139 pounds (the bigger the pilot, the bigger the belt). A joyride lasts for around 30 seconds only. The other company Jetpack Inter­national is coming out with “the world’s longest-flying jet pack.” The Jet Pack H202 keeps you airborne for 33 seconds, 3 seconds longer than TAM’s model! To up the competition both the companies are trying to outdo the other by coming out with better flight-time belts using propane and jet fuel.