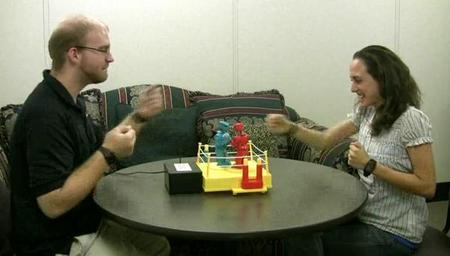 If you needed to punch someone real hard in their face then it wouldn’t necessarily mean that you hate them. It could well mean that you’re just playing another round of Rock ‘Em Sock ‘Em with, well, ‘em. Armed with eight servos and a 2GB SD card, this version of the game is quite different from any that we’ve seen. As Zachery Shivers and Anne Flinchbaug would agree, the wireless controlled game we have here is controlled by four T1 Chronos watches that are worn on each of the hands of the players.

This awesome robot game is touted to be one of the favorite entries in the T1 Co-op Design Challenge.
[GammaSquad]