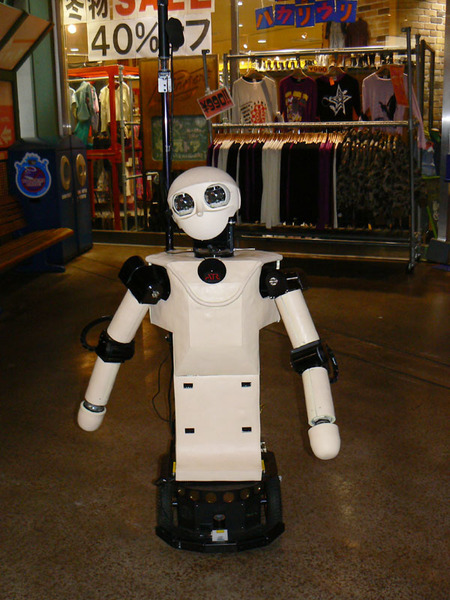 Robovie droid guides you around the Mall

What happens when you are in an alien nation and can’t find your way around the Mall? The stuffy babe behind the help-desk isn’t much of a help either. Don’t despair; help is there in the form of this cute “crowd-monitoring humanoid robot” being developed by the Osaka-based Advanced Telecommunications Research Institute. The robot can actually recognize people that are lost. It goes up to them and then helps them to find their way. The Institute held a few demos this month where Robovie humanoid robot observed people as they passed through a 100 square meter (1,076 sq ft) section of the Universal Citywalk Osaka shopping center. It evaluated the data collected from 16 cameras, 6 laser range finders and 9 RFID tag readers installed in and around the area. The robot was able to watch up to 20 people at a time, pinpoint their locations to within a few centimeters, and classify each individual’s behavior into one of 10 categories (waiting, wandering, walking fast, running, etc.)
Video after the jump

Apparently when Robovie found people who looked disoriented, it went up to them and asked, “Are you lost?” On getting an affirmative answer, the robot gave them simple directions to the destination and pointed the way. If not, the robot proceeded to recommend nearby shops and restaurants. The company announced that it was establishing a permanent base in the shopping center, which will serve as a real-world environment for testing new robot-oriented business ideas. They want to start hiring out the robot to companies that are planning on using robots by this June.