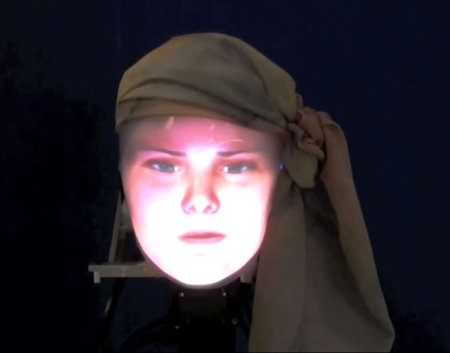 Robotics researchers at the Institute for Cognitive Systems ICS at TU Munchen in collaboration with Japanese scientists have developed a new robot face that can talk and respond like humans. By using a projector to beam the 3D image of a face onto the back of a plastic mask, and a computer to control voice and facial expressions, the researchers have succeeded in creating Mask-bot, a startlingly human-like plastic head. Mask-bot can already reproduce simple dialog. To replicate facial expressions, Takaaki Kuratate developed a talking head animation engine – a system in which a computer filters an extensive series of face motion data from people collected by a motion capture system and selects the facial expressions that best match a specific sound, called a phoneme, when it is being spoken.

This part of the new system could soon be deployed in video conferences. Usually, participants are shown on screen. With Mask-bot, however, you can create a realistic replica of a person that actually sits and speaks with you at the conference table. You can use a generic mask for male and female, or you can provide a custom-made mask for each person, explains Takaaki Kuratate. Mask-bot can realistically reproduce content typed via a keyboard – in English, Japanese and soon German. A powerful text-to-speech system converts text to audio signals, producing a female or male voice, which can then set to quiet or loud, happy or sad, all at the touch of a button.