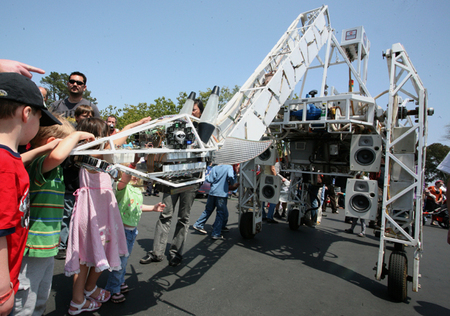 You always expect to see the strangest things at fair. Bearded ladies, fire eaters and now at Maker Faire you will find a seventeen-foot robotic giraffe with webcams in his eyes and special touch-sensitive sensors. And what do you know – this metallic animal Is turning out to be quite the crowd pleaser. Talking to children by introdcing his self as Russel, the metallic animal rewards children when they touch him either saying, “He. He He that tickles,” or “That feels nice.” I know – it sounds more than a little creepy but according to people who have had the opportunity to meet it – it’s not really. They seem more enchanted by it than anything else!

The giraffe is a creation of Russell Pinnington, after whom the robot was named, and Lindz Lawlor, who provides the base for its voice. New for Maker Faire, you can see through Russell the Giraffe’s eyes via this webpage, which is streaming his vision of the world. So go ahead and see the world as a metallic giraffe would!
Source