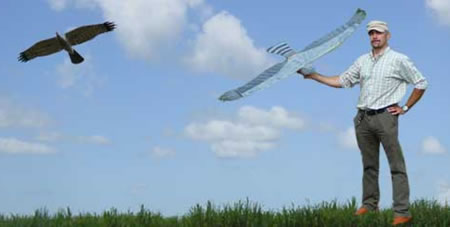 Airports that are troubled by the many birds that hover near the runway causing a probable threat to the aircrafts may get some relief if they invest in this Robotic Falcon. The Falco Robot GBRS (Gregarious Bird Removal System) is the product of a European company called Bird Raptor. After 11 years of development, a life-size mechanical replica of a female goshawk with a 5.25-foot wingspan has been developed. The 2.2-pound UAV requires power for only about a minute after takeoff, then “flies like a goshawk, exploiting thermal updrafts.”

In a test at the Genoa airport, a remote-controlled Falco apparently dispersed 1,000 seagulls.
Source