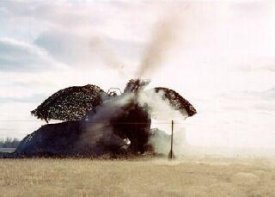 Our dependency on Robotics is increasing day by day, from making humanoids to robos to entertain us; we have ventured in to the field of robotics artillery as well. In a case where everything seems to go wrong, it has been reported that the South African National Defense Force “is probing whether a software glitch led to an antiaircraft cannon malfunction that killed nine soldiers and seriously injured 14 others during a shooting exercise on Friday.” The Oerlikon GDF-005 cannon went out of control during live fire test exercises in South Africa, killing 9 and injuring 14. The demo was a part of the annual force preparation endeavor and had taken place at the SA Army’s Combat Training Center, at Lohatlha, in the Northern Cape. According to SA National Defence Force spokesman brigadier general Kwena Mangope, “it is assumed that there was a mechanical problem, which led to the accident. The gun, which was fully loaded, did not fire as it normally should have,” he said. “It appears as though the gun, which is computerized, jammed before there was some sort of explosion, and then it opened fire uncontrollably, killing and injuring the soldiers.” Defense expert Helmoed-Römer Heitman said “the cause lay in computer error, the reason for the tragedy might never be found.” it is believed that a gallant female artillery officer risked her life in a desperate bid to save members of her battery from the gun.

Electronics engineer and Defense Company CEO Richard Young says that he can’t believe the incident was purely a mechanical fault. He says his company, C 2I2, in the mid 1990s, was involved in two air defense artillery upgrade programmes, dubbed Projects Catchy and Dart.
During the shooting trials at Armscor’s Alkantpan shooting range, “I personally saw a gun go out of control several times,” Young says. “They made a temporary rig consisting of two steel poles on each side of the weapon, with a rope in between to keep the weapon from swinging. The weapon eventually knocked the pol[e]s down.”