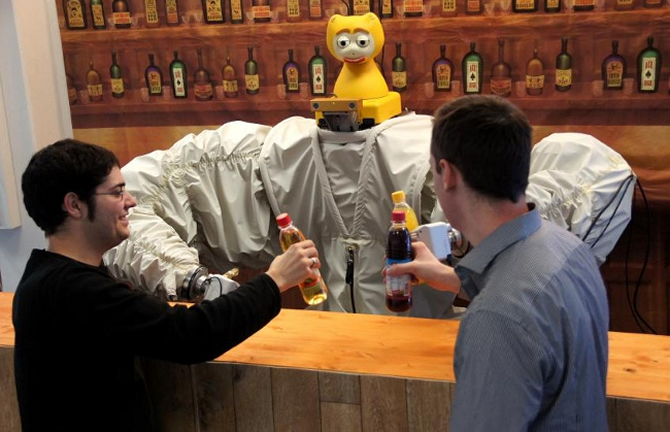 Robotic bartender ‘James’ knows when you want a drink

Are robots cool? Hell yeah! We geeks are always up and ready for some robo-action. What about Robotic bartenders? The concept isn’t entirely all new and we have seen some amazing prototypes including Makr-Shakr which was shown-off at this year’s Google I/O event. But, researchers are hard at work to make them smarter. Scientists at Bielefeld University in Germany are working on a robot bartender that’ll be able to identify and analyze body language of customers on the counter and interpreted as someone wanting to buy a drink. The robo-bartender will be able to successfully interpret different behaviors of customers in a nightclub and offer a drink when the customer might need another round, that too in a noisy environment.


It’s a massively complex function for a robot to distinguish between different human behaviors and for this process the team of researchers analyzed 105 attempts to order drinks at nightclubs in Bielefeld and Herford in Germany and Edinburgh in Scotland and assessed the behavior of customers 35 seconds before they were served. Necessary observations were recorded and updated into the robot bartender program. The program is being tested on James, or Joint Action in Multimodal Embodied Systems, which is a project researcher have been working on since early 2011 and believe to be fully functional by 2014.