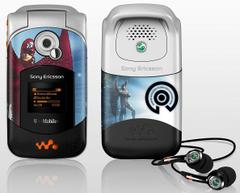 Are you a die-hard fan of Robbie Williams? Then why not tell everyone about it by flashing your Robbie William themed Sony Ericsson W300i phone. Robbie Williams and T-Mobile in collaboration with Sony Ericsson has unveiled W300i walkman phone that will feature unreleased video-clips, songs and wallpapers from the singer’s first concert of the 2006 world tour.(did I see some widened mouths???) the phone will have a special designed Robbie William logo and additional two skins so that you can personalize the phone. It will also feature Robbie William ring tones, logos, animation along with the startup and shutdown screen showing clips of the singer. Don’t worry the phone wouldn’t lack the standard phone features like MP3 player, Digital Camera, FM Radio etc.

It is expected the phone will be released in the European T-mobile markets in June. Still waiting for the news of price tag.
Via – Sony Ericsson