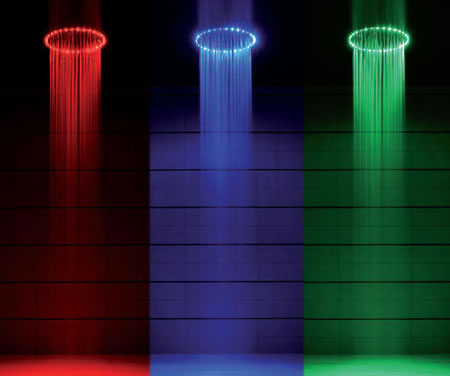 RIO LED shower head to dance in the shower

If you are one to be spending more hours in the shower than separating your bills and making a budget, then this one will lure you. It is Crosswater’s RIO shower head. It is not just any shower head, this one is extremely colourful. It’s not just a phrase, it literally changes colours when you get into the shower and makes you not only sing in the shower but also dance with all its psychedelic colours. The shower head is loaded with 96 computer-controlled LEDs in red, green and blue clusters so they can be mixed to create just about any color in the spectrum. Each one is focused to illuminate a powerful stream of water coming out of the 15-inch diameter shower head’s hundreds of needle-thin jets.

The price of this thing can make you think twice but since we have cleared that you are not the budget preparing one, this might still awe you. It is priced at about $4454. A lesser model is available though but not the same brilliant model, at ThinkGeek for just $49.99.