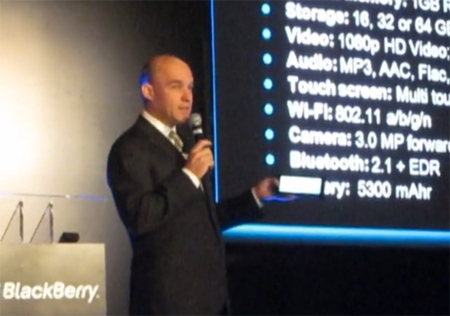 The BlackBerry PlayBook tablet PC made it to the GITEX conference in the Dubai. The company’s CEO showcased an apparent working device and gave the audience a look at the spec sheet in a little more detail. Earlier we had heard that 16GB and 32GB models were on the list but it seems like RIM is following Apple now and is planning on launching a third option with 64GB. Also announced at the gig was the fact that the PlayBook will come equipped with a 5300 mAh battery. That’s impressive too. The fact that there’s been no mention of a microSD or any other memory card slot had worried me a bit, I have to admit, but with 64GB on the plate I think I’m feeling a little better.
Intomobile