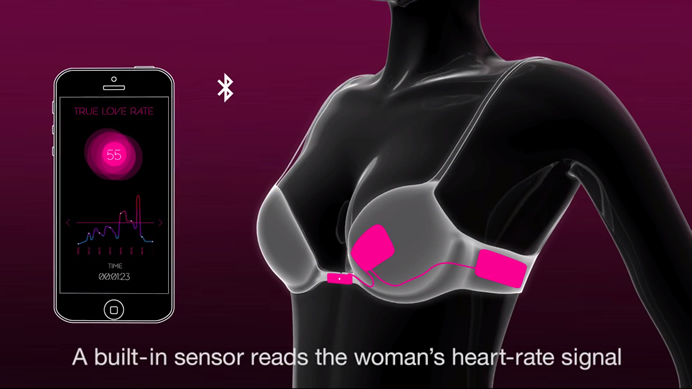 To commemorate its 10th anniversary Japanese lingerie manufacturer Ravijour has released a bra which has the potential to change hook ups and possibly put an end to the ‘walk of shame’. The ‘True Love tester’ as it is called is no ordinary bra, it is more like a chastity belt of the 21st century. The bra comprises of a sensor which monitors your heart rate and other vitals, the data is constantly transmitted via Bluetooth to a mobile phone which processes the data using a special app and measures the heart rate elevation using special algorithms and preset data and it is only when your heart has truly found that special someone would it beat in a way that the app would recognize and wirelessly unhook the bra.

Ladies can relax as not any changes in heart rates will unhook the bra as the experts at Ravijour say it is only when a woman falls in true love does she get excited enough for the Adrenal Mellula to secrete Catechlomine which affects the autonomic nerve and increases the heart rate which is detected by the sensor and processed by the specially developed iOS app. Pricing and availability is not known yet.