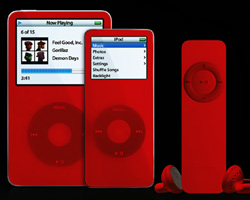 Red Apple iPod, Is it coming ?

Last week rumours surfaced that a Red iPod is in the pipeline. Rumours started after a post on Popbitch, that claimed Bono was overheard “in Dublin’s Michelin-starred Patrick Guilbaud restaurant discussing a new charity red Amex card and red iPod.” However this rumour may turn to a reality as recently Bono unveiled the Red Amex card which was a part of the rumour. The new card is part of Product Red, a new brand of merchandise that was created to help gather funds to aid in the global battle against HIV. It seems that around 40 percent of the profits from the sale of Red Products goes to the Global Fund to Fight Aids. Apple has not yet named any partner for this charity scheme, T3 reports that an announcement may be in the cards.

Wonder which iPod will get the red treatement ? Stay tuned.
Via – T3