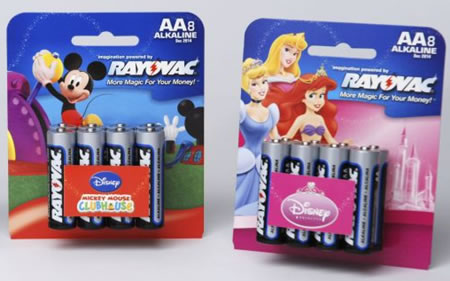 Rayovac batteries have struck a deal with Disney that has resulted in a three-year agreement that will make it the only brand of battery to be sold at Disney parks in the United States. The agreement is a part of a wide-ranging deal between Spectrum Brands, the Rayovac parent, and Disney. The deal includes the six Disney theme parks and water parks in the United States. For their part, Spectrum will license from Disney the rights to use the animated characters on packages of Rayovac batteries sold at the parks and at retail chains like Target and Wal-Mart. The packs will include characters like Mickey Mouse, Lightning McQueen, from the movie “Cars,” Ariel of “The Little Mermaid”, etc. The Disney-Spectrum deal also includes advertising for Rayovac in Disney magazines and on Disney television networks; promotions and sweepstakes; and a sponsorship by Rayovac of the scheduled release in February of the Disney movie “Enchanted” on DVD. In a bid to up the ante, rivals Energizer will feature characters from the film “Shrek the 3rd,” who are joining the Energizer Bunny as part of a promotion co-sponsored by DreamWorks Animation and Energizer Holdings.

The Disney-Spectrum agreement will hopefully boost the company’s position in the market, as it trails behind Duracell and Energizer.
Source