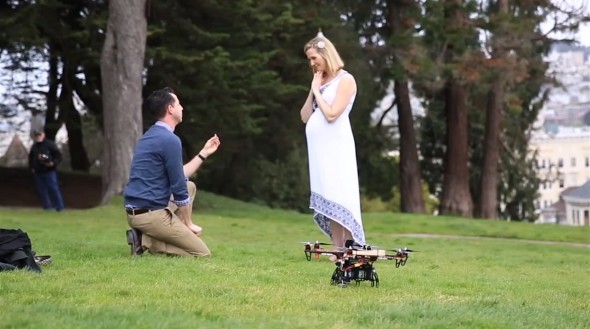 Every man tries to pop “the question” in the most memorable way, some of the most extreme wedding proposals get the highest hits on Youtube, but if you’re one looking to make it special but not extravagant you got to check out how Jason asked Christina to marry him. A Fresno, California, based wedding photographer Chris Geiger shot one of the most unusual proposal video, where the wedding ring gets delivered by a quadcopter. We’ve seen dogs, kitties or some other lovely pets delivering the ring, but a quadcopter doing the noble job is definitely the first.


Jason proposed to his girlfriend Christina at Alamo Square Park in San Francisco, USA, on April 7th 2013. He took her to the park to shoot some photos and that’s when the drone flew in with the ring, check out the amazing video to witness pure awesomeness! Jason shot with a 5D mark II on the ground and two aerial cameras were used on the helicopter, a Gopro Hero 3 black and an 808 keychain camera. Now let’s how many hits does this one get on Youtube.