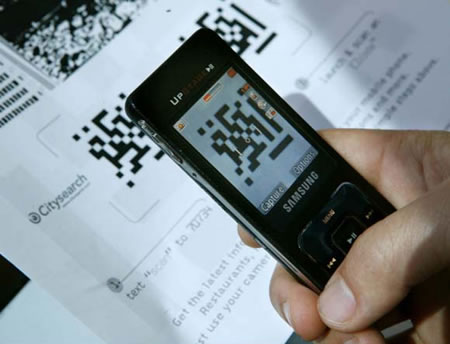 QR codes (Quick Response) have become the rage in Japan from being used as tracking codes in machine assembly to being used in visiting cards or even tomb stones. Now, in the first large test in the United States, online guides Citysearch and Antenna Audio are rolling out the technology in San Francisco. More than 500 restaurants, shops and businesses reviewed by Citysearch are placing printed bar codes in their windows. People who have special software from Scanbuy Inc. loaded on their cell phones can simply take a picture of the code and their phone’s Internet browser will immediately take them to the restaurant’s corresponding Citysearch page. Users will be able to decide, based on the Citysearch reviews and other information, whether to step inside for dinner or keep walking down the street. Right now, if you want audio information for the Transamerica building or a review of Cafe Claude in San Francisco, the Web address is very long. But with one click you can go directly there. That surely is one way to solve the navigation issue of how to get information on your handheld without going down eight layers on a Web site. Scanbuy hopes the pilot program will prove to cell phone carriers that the bar codes work. Scanbuy would like to start embedding the software in future phones, perhaps by the end of this year, eliminating one hurdle toward its adoption. For now, users have to download the ScanLife software to their phone. About 70 phones currently support the software, and users will have to pay cellular data charges when they access a Web page.

However this technology isn’t without its own pitfalls. How would charging users for information about services offered be beneficial to business? Why do consumers have to shell out on data charges, when the same thing can be put up in writing? Would you like to visit a restaurant by the street that has passers by constantly clicking towards your table by the window?
Source