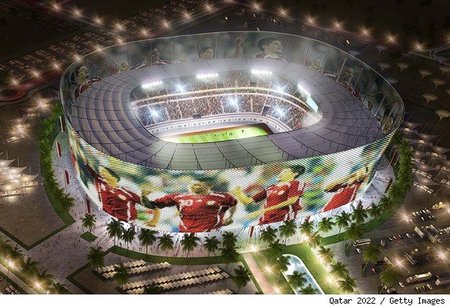 As Qatar celebrates its winning bid for the 2022 World Cup, there’s much speculation on how the host country will look after its athletes, who will be playing under temperatures that could reach up to 50 degrees Celsius. Besides the air conditioned stadiums, Qatari scientists have come up with one solution of artificial clouds to keep the athletes cool.

Remember the bubble-world Truman Burbank lived in? Similarly the scientists have in mind is a synthetic cloud which could shield stadiums and training grounds from oppressive heat. It is reported each cloud could cost in the region of $500,000 and will be developed in conjunction with Qatar Science and Technology Park.
Saud Abdul Ghani, head of the Mechanical and Industrial Engineering at Qatar University, said: “Artificial cloud will move by remote control, made of 100 per cent light carbonic materials, fuelled by four solar-powered engines and it will fly high to protect direct and indirect sun rays to control temperatures at the open playgrounds.” Since its efforts to move the tournament to winter was not received by the Fifa’s governing body, looks like the artificial cloud bubble just might have to do!
[SoccerNet]