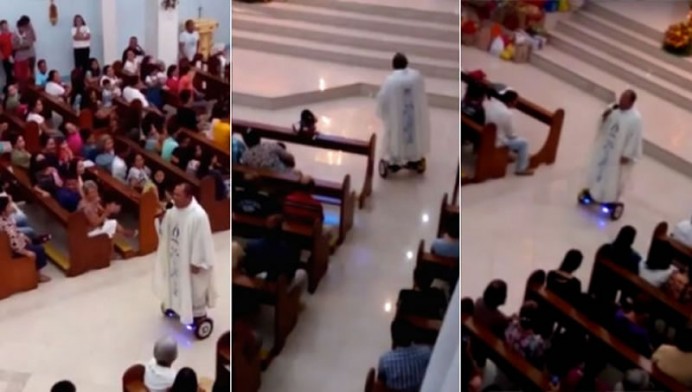 Walking on water is great, hoverboarding during Christmas Eve Mass however is downright inappropriate, as a Catholic priest in Philippines learned recently. The priest was suspended from the Diocese of San Pablo after a few members of the congregation complained about the priest’s hoverboard jaunt during a church service. A statement released by the Diocese of San Pablo reads, “The priest said that it was a wake-up call for him; he acknowledged that his action was not right and promised that it will not happen again. He will be out of the parish and will spend some time to reflect on this past event. He would like to apologize for what happened.”


While using a hoverboard certainly isn’t a crime and in our books is the coolest thing to do this year, the priest seemed to have irritated a number of people in the congregation who seemed to have realized what the money in the church’s offering basket was probably being used for. A video of the priest using the hoverboard during the service has also leaked out on YouTube, featuring him singing (terribly) while riding down the aisle. If it was up to us, we wouldn’t castigate a priest for riding on a hoverboard. Instead, we’d want to be one of the altar servers, following him around on hoverboards of our own!