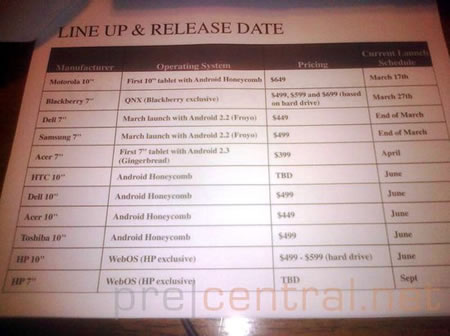 Prices and dates leaked for the next HP, Dell, HTC, Acer and Toshiba tablets

We have leaked information and it’s the good stuff. After the recent report about some Staples’ training materials showing off some upcoming tablets, set to launch later this year, the folks over at pre-central have got their hands on another list exposing dates and prices of these devices.

Looking at what we have, manufacturers are all headed towards pricing their tablets as close as possible to the iPad 2 and not relatively lower, as you would imagine would be the sensible thing to do? June is the hot month when we will see the release of 5 10″ tablets (HTC, Dell, Acer, Toshiba, and HP). So, watch this space!
[UberGizmo]