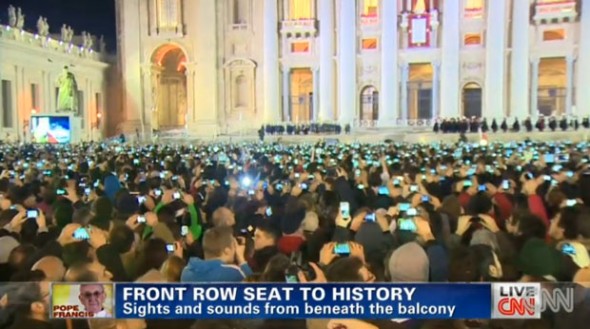 Pope Francis greeted by a multitude of smartphone cameras

The world is changing and is slowly moving towards a technology-packed generation where man and machine will stay united forever, with unbreakable bonds of reliance of the former on the latter! The recent proof of that fact was the announcement of the new Pope. Recently, we came across two photographs, one during the election of Pope Benedict XVI and the other during Pope Francis’ election. As compared to the 2005 photograph, the one captured recently shows a sea of smartphone cameras facing the Pope, eager to capture a glimpse of him!


In a span of just 8 years, the number of smartphones seems to have increased tremendously and these photographs indeed are a proof of just that! These days, smartphone users keep their devices at hand, ready to capture moments in history that will never repeat again. And this isn’t just a single incident where countless smartphones have been pulled out to snap pictures. These days, clicking pictures with these devices seems to have become a standard amongst audiences just about everywhere!