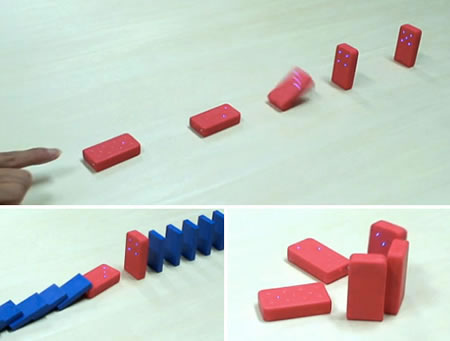 Play the Esper Dominoes fall with a wireless trigger

An age-old favorite, the Dominoes is still favored and played by many people. Needless to say, the game has gone a notch trendier with the Esper concept toy, which is basically a set of dominoes that independently fall over and wirelessly trigger the next one in the chain to do the same! There’s no compromise on the excitement as it still requires you to line them up, and does not take away the joys of watching them all go down. Some of the unique ways the Esper dominoes can be played with, including being mixed in with traditional dominoes. The Esper allows for various ordering methodologies where you simply shake a domino to ’set’ its number, and they’ll always fall in order from the lowest number to the highest.

エスパードミノ from jarashi on Vimeo.
Unfortunately for developer Jarashi Suki and the IAMAS Ubiquitous Interaction Research Group, the idea which was conceptualized in 2009 has still not seen daylight, so chances that we’ll ever see them go into production are slim.
[OhGizmo]