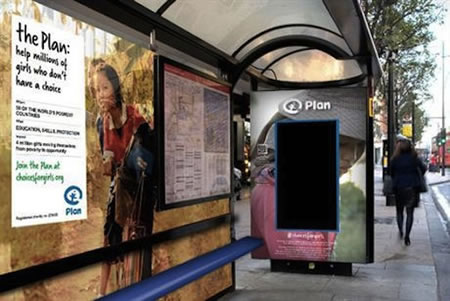 A new technology is being tested that might bring in a new definition for innovative advertisement stints. This interactive apparatus here uses a high-definition camera to scan pedestrians and identify their genders before pulling up a specific ad. For now the system has shown 90% accuracy rate when it comes to analyzing the person’s facial features and concluding if they are male or female. The display is priced at US $47,400 equivalent and is being put by Plan UK, a not-for-profit organization that helps children in third-world countries.

When female pedestrians pass by this screen, the display will show a full 40-second video of its ‘Because I’m a Girl’ campaign that promotes sponsoring a girl to receive proper education in a developing country. However for males, they won’t be able to see the full ad and will be instead directed to Plan UK’s website instead. The ad campaign will be on for two weeks and seeks to raise quarter of a million pounds in donations during the next four months.
[Mashable]