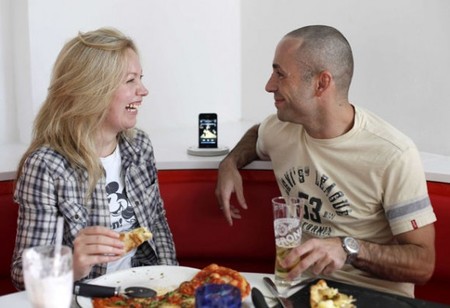 The slightly up-market pizza chain, Pizza Express, is trialing iPod docks in one of its London establishments. The Pizza Express restaurant in uber-swanky Richmond will soon have iPod docks fitted behind the seats. This is the first step in an experiment by the restaurant chain to create a “Living Lab” restaurant of the future, with electrical hook-ups all over the place to keep their customers connected. “Future Express”, as they are calling the project, is a collaboration between top Pizza Express bods, theater director Karl James, radio host Nick Luscombe, DJ Sergio Luzzi and designer Enzo Apicella. Other features of Future Express include sound-proof parabolic booths, somewhat akin to the shower booths of Tokyo Burger King, and a call light like you find on airplanes.

By trialing the iPod docks in Richmond, I guess Pizza Express are hoping to minimize the incidence of theft and vandalism. Wait until the techno-gadgetry hits the central London and inner city restaurants. That’s a disaster waiting to happen.
[Slashgear]