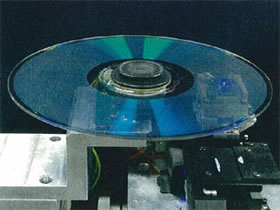 Pioneer Japan has announced that it has successfully developed a 16 layer Blu-Ray disc which can hold 400GB of data. The capacity of each layer is 25GB and using the disc manufacturing technology used for DVD’s 16 layers are laminated on the disc. The technology for the reader is not perfected yet as a new technology has to be developed which can read data from 16 layers. Further details and technical information will be released by Pioneer at the International Symposium on Optical Memory and Optical Data Storage 2008 (ISOM/ODS2008) to be held in Hawaii from July 13.
(Full press release after the jump)

Eye-pattern signals obtained from the layers
July 7, 2008, Tokyo, Japan – Pioneer Corporation has succeeded in developing a 16-layer read-only optical disc with a capacity of 400 gigabytes for the first time in the world*1. Its per-layer capacity is 25 gigabytes, which is the same as that of a Blu-ray Disc (BD). This multilayer technology will also be applicable to multilayer recordable discs. This development has bolstered Pioneer’s confidence in the feasibility of a large-capacity optical disc, which is expected to become necessary in the near future.
For multilayer optical discs, it has been difficult to obtain clear signals from each recording layer in a stable manner due to crosstalk from adjacent layers and transmission loss. Utilizing the optical disc production technology that it has developed in the DVD field, Pioneer solved these problems by, among other things, using a disc structure that can reduce crosstalk from adjacent layers, resulting in a 16-layer optical disc that can playback high-quality signals from every layer.
As for the read-out system, Pioneer achieved stability in the playback of recorded signals by employing a wide-range spherical aberration compensator and light-receiving element that can read out weak signals at a high signal-to-noise ratio in the optical pick-up mechanism. Since the optical specifications of the objective lens, such as NA (Numerical Aperture)*2, are the same as those for the existing BD discs, it is possible to maintain compatibility between the new 16-layer optical disc and the BD discs.
The 16-layer optical disc technology, capable of storing much more data than the conventional discs on one disc, will greatly reduce the number of discs to be used and therefore contribute to the conservation of resources.
Pioneer will present the details of this research at the International Symposium on Optical Memory and Optical Data Storage 2008 (ISOM/ODS2008) to be held in Hawaii from July 13.