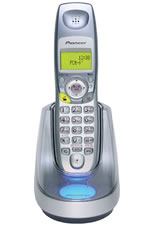 Pioneer TF-FS55M-S best of both worlds

Pioneer communications Japan a division of Pioneer Electronics has announced the TF-FS55M-S which is a combination of VoIP (Skype) and a normal (PSTN) landline. The phone works simantaneously with both Skype and PSTN networks it has a large LCD which displays login state, contacts and status of contacts in respect to Skype. As for PSTN connection it can store 100 contacts. The phone has a talk time of 9 hours and standby time of 160 hours. It connects to the host via USB and is compatible with Windows 2000 / XP PC’s only.