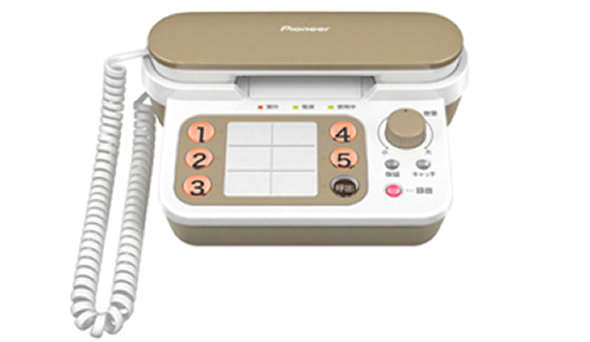 A few days back we covered Softbank’s android phone designed especially for elders, and now we have a cordless phone by Pioneer exclusively built for old aged. The cordless handset with a rather complicated name ‘TF-TA61RW-T’ will be released in Japan by mid-September. This unit will act as an auxiliary unit to a base phone connected by DECT and will be powered by a Ni-MH battery that’ll keep it running for more than 120 hours on standby and 6 hours of talktime.


The handset has a very simple dial pad with large 5 numbered buttons which can be pre-set with desired phone numbers. Name tags can be fixed along the buttons for the elderly to dial numbers with ease. The numbers illuminate when the person registered to that specific button calls. To adjust the call volume, a big knob is placed next to the receiver. The cordless handset by Pioneer will be launched in Japan for a price of Yen 10,000 ($100 approx).