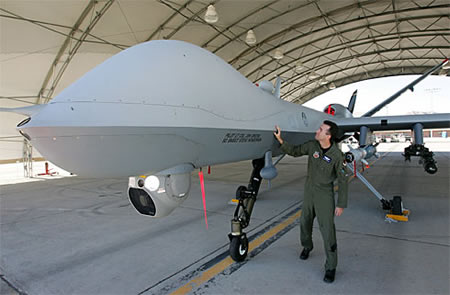 Pilotless airplanes to be deployed in Afghanistan

Taking the war against terror to another level is the decision to deploy next-gen pilot-less airplanes with the bombing power of an F-16. The Reaper is an upgraded version of the Predator; it can fly three times as fast as a Predator and carry eight times more weaponry, such as Hellfire missiles. The main aim behind taking the Reaper to Afghanistan is that the aircraft is more efficient in the fields of range and speed. It is better suited than the Predator for Afghanistan’s vast, rugged terrain. The Reaper’s speed and arms will let it track and kill moving targets, thus making it a better alternative.

The Reaper squadron will start off small and have only four aircrafts in the fleet. It will ultimately have 20 planes. The Air Force has already trained 10 Reaper operators this year, and expects to train 19 more in 2008.
Source