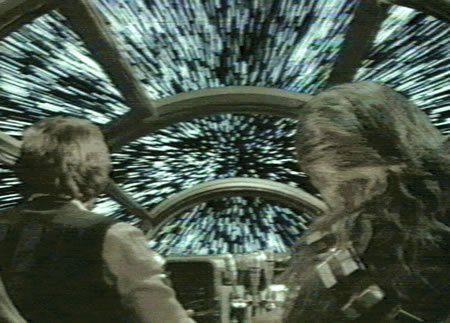 Star Trek fantasies of interstellar civilizations and voyages powered by warp drive may no longer be the exclusive domain of science fiction writers, with two physicists from Baylor devising a new scheme to travel faster than the speed of light. Associate Professor Gerald Cleaver and Richard Obousy have come up with a novel idea to produce a warp drive that they believe can travel faster than the speed of light, without breaking the laws of physics. A starship could “warp” space so that it shrinks ahead of the vessel and expands behind it. By pushing the departure point many light years backwards while simultaneously bringing distant stars and other destinations closer, the warp drive effectively transports the starship from place to place at faster-than-light speeds.

According to the physicists, scientists would require to harness a mysterious and poorly understood cosmic antigravity force, called dark energy. The dark energy is believed to be responsible for speeding up the expansion rate of the universe as time moves on, just like it did after the Big Bang, when the universe expanded much faster than the speed of light for a very brief time.
According to relativity theory, matter cannot move through space faster than the speed of light, which is almost 300,000,000 metres per second. But that theory applies only to unwarped ‘flat’ space.
There is no limit on the speed with which space itself can move: the spaceship can sit at rest in a small bubble of space that flows at “superluminal” – faster than light – velocities through normal space because the fabric of space and time itself (scientists refer to spacetime) is stretching.
According to Cleaver dark energy would be used to create the bubble: if dark energy can be made negative in front of the ship, then that patch of space would contract in response. “Think of it like a surfer riding a wave,” the Telegraph quoted Dr Cleaver, as saying. “The ship would be pushed by the spatial bubble and the bubble would be traveling faster than the speed of light,” he added. The new warp drive work also draws on “string theory”, which suggests the universe is made up of multiple dimensions. We are used to four dimensions – height, width, length and time but string theorists believe that there are a total of 10 dimensions and it is by changing the size of this 10th spatial dimension in front of the space ship that the Baylor researchers believe could alter the strength of the dark energy in such a manner to propel the ship faster than the speed of light.
Syndicated via ANI