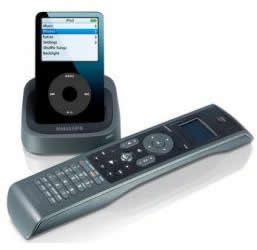 Why should you get the new Universal remote from Philips did you ask? Well simply because the Philips SJM3151 is quite a handy remote to have around. It is an amazing standard six-device universal remote and a full-service iPod remote. It features a built-in LCD screen that replicates what’s on the docked iPod. Quite like the Philips SRU9600, this one is capable of being programmed control your home theater peripherals like TV, cable/satellite box, DVD player, AV receiver. It works via infrared as well as the Zigbee RF wireless standard to control the iPod dock (included) at distances up to 300 feet.

The Philips SJM3151 will be out in the fall of 2007 for $180. Incase you are looking for something to control PC-based music files; a similar version will be out with a USB dongle instead of an iPod dock.
Source