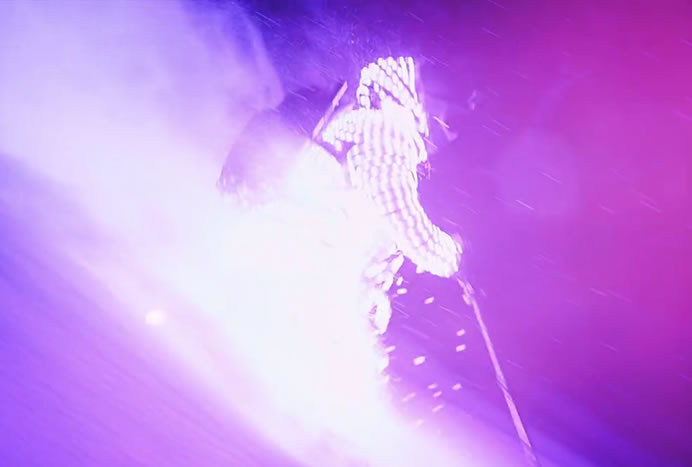 Philips puts a glow in the snow with LED skiing suit

Sweetgrass Productions have released a movie, ‘Afterglow’, more like, after-dark-glow-in-the-snow. The film is supported by ad agency Ahlstrand & Wållgren and Philips TV. Simply put, and what you will agree with me on watching the video, is the fact that the three-minute flick is all about luminous bodies skiing expertly down Canadian slopes in the dead of night. The spectacle created is the result of the lights that create an ominous herald of scattered light as the skiers zoom by. While this also doubles as a virtual headlamp, the glow also lights up any snow that is kicked up, leading to a distractive obstruction for the skiers. But that’s a minor worr when it comes to the bigger picture. The experiences of Nick Waggoner are captured after the jump.

To answer all your questions on how they pulled this off, Nick Waggoner spoke to Huffington Post. An excerpt of the conversation follows:

“The technical production of the segment involved a MASSIVE amount of energy, 5 weeks of filming, 9,000 lbs of equipment, operating 70 miles from a road at times, in temperatures as cold as -15 in the deepest snow on earth.

“It was definitely a logistical nightmare, but one tamed by our 14 person crew to produce what you see here. From Zac Ramras and Max Santeusanio working on the details of production to controlling the camera on the aerial cinematography, all the way to our lighting team, it was a disgustingly big effort. We [pored] over crazy lens diagrams for lights, read over their photometric charts and electrical currents for months, and finally came up with a system that involved 8 main lights, 8 generators, 16-20 light stands, miles of extension chords, colored filters, and a heap more of support equipment.

“We topped that off with an optacopter carrying the weight of a Red Epic Camera slung on a Movi Stabilization system. If it sounds high-tech, that’s because it is. Yet despite the complexity, like I said, our team worked so hard to make it feel as smooth as it could. Each night would kind of flip-flop, and after a while, you kind of came to expect that if you were having a great night, that everything imaginable would go wrong the next night. I think filmmaking is often like that— as soon as you celebrate your victories the medium is there to put you back in your place as a small little pea in a frozen bag of vegetables at the back corner of a fallen-on-hard-times small town grocery store. During the graveyard shift. In winter.

“The LED suits themselves were custom manufactured. Zac and Max, our two main producers, worked closely with a LED guru to build the suits out. It involved getting the clothes direct from Patagonia and Arc’Teryx, then sewing thousands of tiny LEDS into each article of gore-tex, and then wiring it with a battery the size of a candy bar. We had no idea if they’d even work, and it was an electric feeling when Pep Fujas dropped into a line and came over the first roll radiating blue. We all screamed over the radios, in awe, and Pep was chained to the suit pretty much the rest of the trip. It wasn’t all roses and rainbows though. Max and Zac were constantly running into the lodge to solder loose wires and fix broken elements of the suit at 4 a.m. to get it back out into the field.”