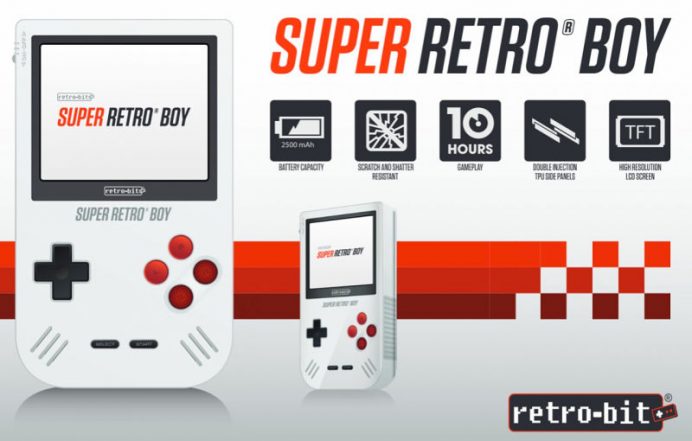 Peppered with smart upgrades, Game Boy replica makes its way into the market

Game Boy – The very popular handheld gaming system by Nintendo, sunk into oblivion a little over 10 years ago, despite numerous updates and iterations made to it from time to time. And while there’s no word of Nintendo re-launching the much-loved portable console, another company named Retro-Bit is gearing up to end the Game Boy’s decade-long hibernation. Enter Super Retro Boy – pretty much a replica of the original Nintendo Game Boy. However, other than the conspicuous compact form factor, there really is no other similarity between the two handheld game buddies.

The Super Retro Boy will feature a scratch and shatter-resistant TFT HD display, and a powerful 2,500 mAh rechargeable battery will keep it charged for up to 10 hours. On its launch in North America in August 2017, Super Retro Boy is expected to cost USD 80.

The Super Retro Boy will retain all of the original Game Boy, including Game Boy Advance cartridges, Game Boy Advance titles and Game Boy Color. However, it also has an extra pair of buttons on the face, below the standard A and B set, which may probably make playing certain titles slightly more challenging on the Super Retro Boy. It is expected though that Game Boy fans won’t mind trading that challenge with having their prized (and almost extinct) Game Boy back again.