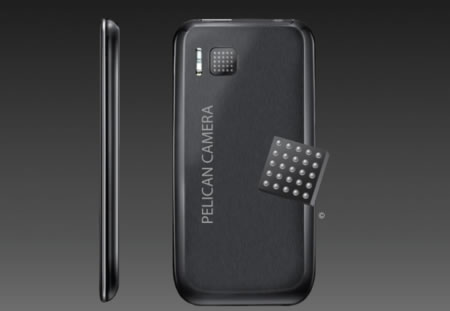 Pelican Gives the World a Much Better Camera Design for Smartphones

You have a phone that boasts of say 10 megapixel camera but yet fails to deliver impressive images. Ever wondered why? Pelican Imaging, a California based technology startup company, tells you that no matter what megapixels the built-n camera packs in, it would be futile if the overall capabilities of the camera aren’t enough to grab as much light and process the images effectively. With the help of smart software and a new camera module design, the company has attacked the problem of underperforming chunky camera phones. The module design here is of an array composed of as much 25 micro-cameras which benefit from the variety of data captures by each of them and poses to be a much thinner alternative to presently available module designs.

The Pelican array of cameras here will take the optical data and process it using their software to create high-quality images. The software will rely on the phone’s dual core processors and special media processors for processing power. Owing to this company’s work, we can expect tech big-wigs to pack in heavy duty features in dainty petit attires as bulky camera units would become a passé. Phone makers can embed this technology in their software in return of small license fee to Pelican. We want to see which of the smartphone manufacturers in the tech town will be plunging in first to incorporate this one.
[Gizmodo]