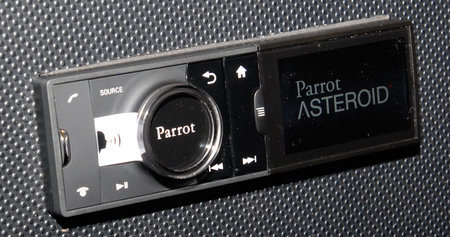 A pre-CES tour unveiled the very interesting Parrot Asteroid, a “smart” car radio that can find cheap fuel, free parking, and speed traps while taking music requests and placing phone calls. The Asteroid which runs on Android, like its digital photo frame, includes a 3.2 inch screen on the front uses its own Android UI to mitigate the lack of touch input. The Asteroid also feature a USB ports for MP3 players, GPS devices, slot for SD cards, and the types of 3G network wireless Internet service keys that people use for laptop computers. The Parrot comes with its own SDK and marketplace for applications, given the lack of a traditional touch input. It will also provide map support as well as AM/FM and library support for iDevices and external storage.

A Bluetooth and RDS support will also be present. No word on pricing yet but Parrot plans to launch in major European markets in Q1, and in the US in Q2. A touch-screen, dash-mounted version of Asteroid will be the “next step” but the company would not discuss when it can be expected.