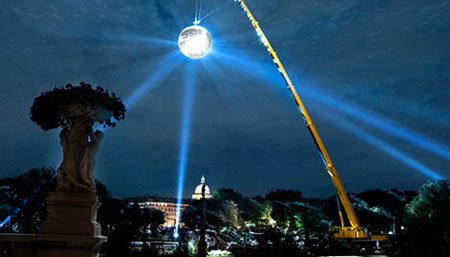 How big can the party get? Is it as far as the disco ball reflects the lights? Well, if that’s what you answer is then you’ve just landed yourself something nice and juicy. Behold the world’s largest disco ball with 1000 mirrors, 7.5 meters large and suspended 50 meters in the air. Location: Paris. The ball is lifted up there by a crane (pretty messy, but it doesn’t matter) and is the genius work of conceptual artist Michel de Broin.

The giant disco ball was suspended in that Jardin du Luxembourg during the Nuit Blanche even in Paris. It’s said to reflect the lights of Paris and amplify their brilliance with all the mirrors it has.
[LifeLounge]